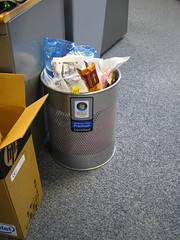 Is your bin Vista Certified?

Finally, I’ve had time to write down my notes on using aircrack-ng with the Airpcap Tx adapter in Windows. Before you read on, please be aware that this isn’t meant to be a guide or tutorial, it’s just my notes. Thanky 🙂

Deauth (if we need ARPs):

I’ve prepared a special release of the aircrack-ng tools originally prepared by CACE Technologies on the AirPcap CDROM. It replaces the new aireplay-ng.exe with an older one which, in my tests, appears to perform better.

To get OpenOffice to Save in Microsoft Word .doc format by default, follow these steps:

I know that saving in a proprietary format over an open standard is bad practice, but sometimes in Business you need to maintain interoperability with the de facto standard; in this case: Microsoft Word.