I love understanding human nature, and why I feel the way I do in certain situations.

One of my favourite videos on this, which touches on human teams, the important of feeling safe, and leadership responsibility, is Simon Sinek’s “Why leaders eat last” talk. At 45 minutes, it’s a good lunchtime video.

For those who prefer to read, I’ll try to summarise the themes and my main takeaways, including what we can all do to make each other feel safe and valued.

It’s easy to forget, but at a base level, we’re still pack animals. Only nowadays our “pack” could be our family or our work colleagues (our team).

Humans work best in a team, with common goals and values. But they can only work together when they feel safe. Without the feeling of safety; cohesion, cooperation and caring disappear and the pack focuses inwards on themselves individually. They become selfish for self-preservation. It’s the responsibility of leadership to create that feeling of safety. The feeling of safety in a company derives from things like, management “having our backs” and protecting us in difficult situations, or supporting our decisions and intentions.

The role of chemicals and their effects

Chemicals in the human body have an incredible effect on us; they influence the way we feel, and the way we behave. Usually with the primary goal of survival. Survival means different things in different contexts. It could be literal survival (needing to eat) all the way through to job survival, so it’s important to understand the basics.

The 4 main chemicals that influence us are:

You can get both of these without other people. They’re “standalone”.

To get Serotonin and Oxytocin, you need other people!

The importance of teams, and the responsibilities of leadership 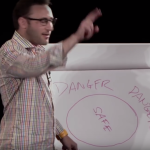 Packs of humans emerged because of outside dangers that were killing us. By grouping together and working as a unit, we could survive, together. The same concept applies to teams of co-workers; only the outside dangers are things like the competition, or the economy.

But to work as a team and survive, the pack must feel safe. When we know we all have the same interests at heard and the same goals, we work together. If we don’t work together, the lack of cohesion means we’re less likely to survive. A great story on this is Aesop’s Fable.

Once you have a pack though, internal dangers are also a variable problem, a variable that’s mostly in the hands of leadership. In the modern world, Leadership decisions can include things like: messaging, layoffs to increase profitability, transparency, having your back and supporting you.

Responsibilities of leadership are:

Great leaders extend the “circle of safety” to the outer edges of the company, so that even the most junior member of the company feels safe, feels that they belong.

The benefits of feeling safe

When we feel safe, we’re more likely to take risks, to innovate, to help others succeed, to elevate others, to co-operate, to “change the world”. But if we don’t feel safe; we can’t achieve any of those things because our energies are focused purely on our own survival.

In the distant past, leaders got to “eat first” because there was a social contract/expectation that when danger came along, the leaders would step up and defend the pack. The reason Leadership in some organisations fails is because they receive all the benefits of leadership (bigger office, better pay, large bonuses) but when the shit hits the fan, they fail to take action to defend the pack. And when that happens, the pack stops feeling safe, stops trusting leadership, and then breaks up in order to focus on self-preservation.

Cortisol is released when we’re in Danger or perceive ourselves to be in danger. It makes us more alert, and also spreads rapidly throughout the pack, in the interests of group survival. Just think of layoffs, and how rumours and anxiety quickly spread throughout an entire team.

One of the really bad things about Cortisol is that it inhibits the release of oxytocin. It literally makes you more selfish! So when your teams don’t feel safe, team members are more likely to look out for themselves. It’s not their fault, it’s the Cortisol!

How to make others feel safe

This next section is mostly just my own opinions. I’d greatly value your own thoughts on this! And the best thing about all of these things? You don’t need to be a manager to do them 🙂

Do something nice, selfless

Take the power thank you as an example: Saying thank you, and explaining the impact is far, far nicer than just receiving a “thanks” email. Go the extra mile as a leader and give the thank you as a face-to-face conversation, the impact is incredible! See also this 3 minute TED talk on remembering to say thank you.

Have your employees’ backs

Stand up for your direct reports, your colleagues, your counterparts. Support their good intentions, the work that they do, champion their efforts at all levels of an organisation. When people know they’re supported, they’ll work even harder for you.

Email is too easy. It’s “fire and forget”. Spend time building relationships with people and the rewards, though intangible, will be worth the time.

People get scared when they have no idea what’s going on. Fear and anxiety spreads quickly throughout packs/teams (it’s a Danger, after-all!) So be as transparent as possible during difficult times. When people know they’re being told as much as possible, they’re less likely to stretch to ridiculous – and pessimistic – assumptions based on rumours that have mutated as they’ve been passed on.

Work with each other to define these; as they should all be agreed upon. This gives your team a foundation to start building and improving trust.